Lindsay McGrail is finally having a glass of wine, relaxing at the close of the fall-themed prix fixe dinner she just hosted at Green Zebra on Culver Road. Earlier that day she hosted a baby shower with 30 guests.

“I’ve had mostly cereal for dinner all week,” said McGrail, who opened Green Zebra this past spring on the same block as ROAR nightclub and the Sticky Soul barbecue joint.

McGrail has operated Green Zebra, which is named for a striking variety of tomato, for almost 15 years. In that time, she’s focused on serving meals of local ingredients at private events and to the customers of her company’s meal clubs.

After cooking for so long out of different commercial kitchens and catering events from clients’ garages, laundry rooms, and other out-of-the-way spots, McGrail decided her business needed a space where it could flourish. 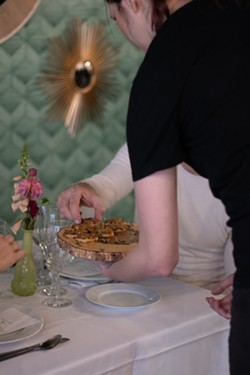 “I wanted to be able to see the people enjoying the food,” McGrail said. “I wanted to have conversations about it, and eventually teach food skills.”

At last, McGrail has established a home base for Green Zebra, where she offers unique dinner events, hosts private parties, creates the meals that patrons can subscribe to, and teaches cooking classes.

The dinner this night, prepared with the help of McGrail’s Sous Chef Harry Gavens
and her right hand, Sue Walczak, was meant to whet the palate for seasonal flavors and featured mouth-watering snacks.

Dinner kicked off with an appetizer of king salmon and diced apple served in a thin, crispy pastry ring, paired with cauliflower custard and salmon roe served in the bowl of a Japanese-style soup spoon. This and each following course came with a wine pairing, which was an optional add-on for the dinner.

The savory-sweet combinations continued with the first course of a butternut squash schnitzel with a crispy pecan coating, served with a baby greens salad accented with cranberry and goat cheese. Next came local heritage pork, two ways: a brined tenderloin and slow roasted shoulder — each melt-in-your-mouth tender — paired with a fennel-potato gratin, carrot puree, and local pear chutney. The meal was capped with an apple galette and buttermilk ice cream.

With full bellies and happy palates, several of the 20 diners lingered to finish glasses of wine and chat with McGrail and her staff, in the breather moments before they began the next task of the night — cleaning up.

This kind of elevated dining experience — where you get to partake in one-off creative and expert experiments with flavors, textures, and presentation, but also get to chat with the chef — is rare in Rochester.

Since opening the new space, McGrail has hosted special events like bridal showers, private cocktail parties, b’nei mitzvah, and themed prix fixe dinners to intimate gatherings of friends and strangers. She has offered cooking classes that focus on such challenges as making meals with “intimidating fall vegetables” and skills like properly breaking down a massive squash.

Additionally, Green Zebra offered a fall dinner subscription and a soup subscription, both of which have sold out.

From mid-July until football season commenced, Green Zebra also hosted a small-plates dinner series on Monday nights, which featured a series of prix fixe dishes and was frequently attended by fellow foodie Carter Burwell, who is a farmer, baker, and owner of home-based food businesses Burwell Kitchen and Burwell Herbs.

“I’ve really enjoyed the dinners because there is a warm, casual atmosphere combined with exquisitely prepared plates you’d expect to find in foodie cities all across the nation,” Burwell says. “It lets an upper-tier of finer dining feel accessible to all, which is quite lovely.”

Burwell also says that McGrail takes dishes that patrons might not otherwise try or know how to eat and makes them approachable, yet refined. She adds that McGrail has “a deft and experienced hand at layering flavors.” 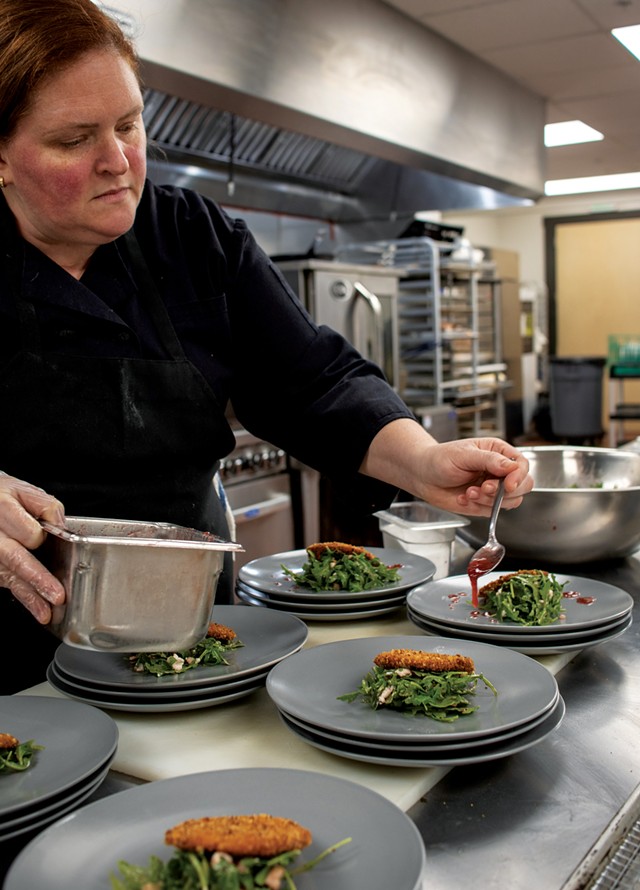 Green Zebra features a 16-foot island where patrons gather for classes or meals. The space can fit up to 40 guests for its dinners and it can accommodate up to 75 people for a cocktail party. Classes are restricted to 12 people, and participants take home what they make in addition to new skills.

It’s a mostly pristine, sparse space, but pops of personality are present in the emerald-hued wallpaper on a long accent wall that’s also lined with gilded mirrors, and a photograph of Julia Child throwing her head back in a cackle while preparing a meal. The entrance is adorned with framed restaurant menus that McGrail’s grandparents collected.

Green Zebra has a number of events slated for the rest of the year, including an upcoming family-style dinner series on Tuesdays, beginning Nov. 16 (but skipping the week of Thanksgiving). The dinners, called “Our Table Tuesdays,” will include a main dish and sides for $30 per person, which does not include tax, tip, or beverages. Each event is limited to 25 people, and menus can be found on the website at greenzebracatering.com.

November’s classes include making the perfect Thanksgiving side dish, on Nov. 18. Participants will learn how to make a butternut squash and caramelized onion tart, which can be taken home and frozen for Thanksgiving. The class fits 12 at $40 per person. Snacks and beverages will be available.

For the week of Thanksgiving, Green Zebra is also offering brined whole turkeys, breasts, or smoked legs, seasonal gourmet sides, and homemade desserts by Burwell Kitchen and Black Cat Baking Co. The full menu is on the website, and the goods will be available for delivery or pickup on Wednesday, Nov. 24.

Rebecca Rafferty is CITY’s life editor, and can be reached at [email protected]